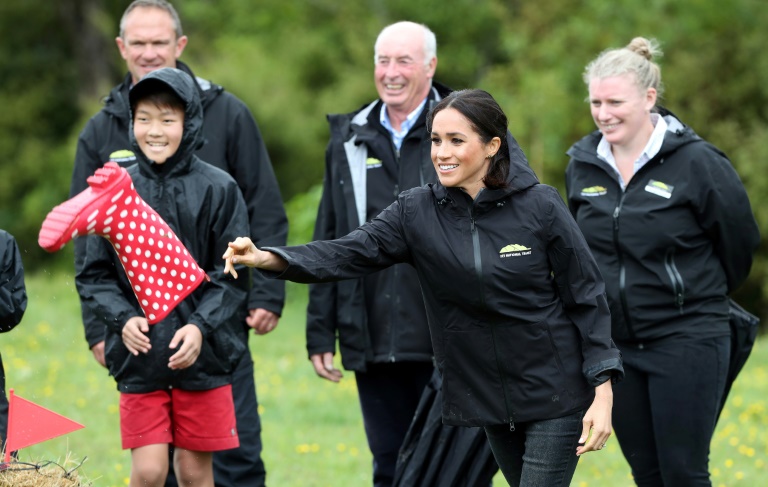 Prince Harry and wife Meghan competed at “welly wanging” and were gifted a toy kiwi Tuesday, but narrowly missed out on the ultimate New Zealand experience when a powerful earthquake rattled parts of the country they had left just the previous day.

The “Shaky Isles” lived up to their name as the royal roadshow moved to Auckland from Wellington, where the national parliament was temporarily suspended when a deep 6.2-magnitude tremor hit the central North Island.

Reporters traveling with Harry and Meghan said they did not feel the mid-afternoon quake and the royals proceeded as planned with a walkabout on the Auckland waterfront.

Members of the public were keen to give pregnant Meghan presents for her baby, which is due early next year, with gifts including a plush kiwi toy and an All Blacks onesie.

Accompanied by Prime Minister Jacinda Ardern, they smiled and posed for selfies with members of the crowd, despite rainy weather.

Earlier, Meghan displayed an unexpected talent for “welly wanging”, gaining bragging rights over Harry after they competed in the oddball New Zealand sport.

When she married into Britain’s Royal Family in London five months ago, it’s doubtful Meghan envisaged her duties would include standing in a rain-soaked paddock half a world away, hurling a wellington boot into the distance.

But as schoolchildren on her team chanted “Meghan, Meghan, Meghan”, the pregnant duchess gave a flick of the wrist and sent her red-and-white polka dot welly sailing past Harry’s best effort.

Clutching her prize, a miniature mounted wellington boot, the American-born former actress told her team: “You should put it in your school. Now that’ll make a show and tell!”

Pinehill School pupil Isabella Iti said there was a friendly rivalry between the couple as they lined up for the big event.

“I think she was thinking that there was no chance that she would win. But she did,” she said.

Wellington throwing is one of the unusual activities seen at rural fairs and fundraisers in New Zealand, along with wood chopping, olive-pit spitting and speed tree-climbing.

Despite her impressive performance, Meghan would need to train hard to match former Commonwealth decathlete Brent Newdick, who once reportedly threw his welly 48.5 meters (160 feet) only to be disqualified because he was not a local.

The royals also helped plant native trees as part of an environmental project and visited a charity called Pillars, which provides support to the children of prisoners.

Harry said the charity was a way to “children can have stability in times of turmoil”.

The couple are in the final days of a packed 16-day tour that has included more than 70 engagements in Australia, Fiji, Tonga and New Zealand.