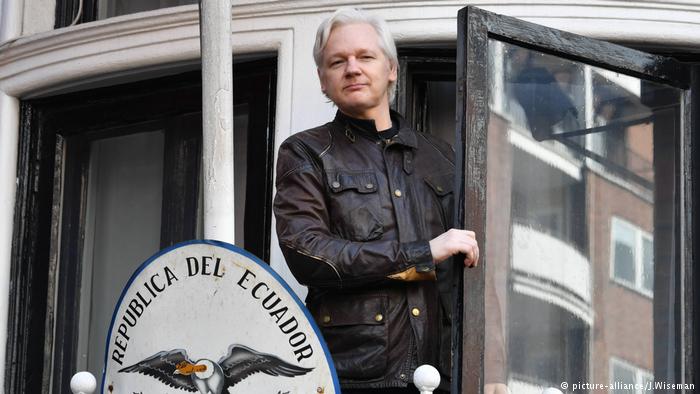 Ecuador has granted citizenship to Julian Assange, who has been holed up inside the Ecuadorian embassy in London for over five years. Quito has said naturalization should provide Assange with another layer of protection.

Ecuador on Thursday announced it had granted WikiLeaks founder Julian Assange citizenship in what appeared to have been an unsuccessful move to usher him out of their London embassy without the risk of arrest.

“The Ecuadoran government is empowered to grant nationality to the protected person and thus facilitate… his inclusion in the host state,” Ecuador Foreign Minister Maria Fernanda Espinosa told reporters on Thursday, adding that Assange had become a citizen on December 12.

A day earlier, Assange alluded to the citizenship announcement by posting a photograph on Twitter of him wearing an Ecuadorian football jersey.

However, naturalization appeared to do little to help the Australian-born WikiLeaks founder’s case, with the British foreign ministry stressing that the only way to resolve the issue was for “Assange to leave the embassy to face justice.”

Earlier on Thursday, Britain said that it had a refused a request by Ecuador to grant Assange diplomatic status, which would have granted him special legal immunity and the right to safe passage under the Vienna Convention on Diplomatic Relations.

“Ecuador is currently exploring other solutions in dialogue with the UK, like good offices of renowned authorities, other states, or international organizations that could facilitate a just, final and dignified solution for all parties,” Espinosa said. “There are well-founded fears we have about possible risks to his life and integrity, not necessarily by the UK but by third party states.”

Assange has been living in Ecuador’s embassy in the affluent borough of Knightsbridge since 2012, initially to avoid extradition to Sweden over rape charges. The WikiLeaks founder, who maintains his innocence, said he feared that Swedish authorities would extradite him to the US where he is wanted for disclosing thousands of classified military and diplomatic documents.

Swedish prosecutors dropped their charges against Assange last year, but British police have said they are prepared to arrest him for breaching bail conditions.

Espinosa said that Ecuador could seek out a “third country or personality” to resolve the stand-off with Britain.

Ecuador running out of patience?

Recently, Assange has run the risk of angering his hosts. Shortly before the 2016 US election, WikiLeaks accused Ecuadorian officials in the London embassy of temporarily cutting off the former computer hacker’s internet access for publishing an array of emails belonging to Democratic nominee Hilary Clinton’s campaign in a bid to impact the vote.

More recently, Assange’s vocal support for Catalan’s independence push drew the ire of Ecuadorian President Lenin Moreno, who was forced to respond to complaints from the Madrid government.

“We have reminded Mr Assange that he has no reason to interfere in Ecuadorian politics because his status does not allow it,” Moreno told a Spanish newspaper. “Nor in that of nations that are our friends. He does not have the right to do so and he has committed himself to this.”