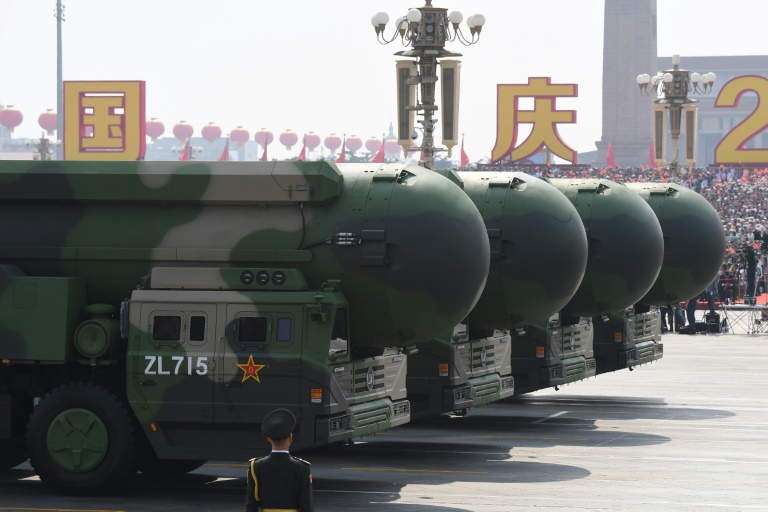 Global defense spending saw its biggest jump in a decade in 2019, driven by the US and China, a study said Friday, as rivalries and conflicts stoke military investment.

The International Institute for Strategic Studies (IISS) said the four percent rise, compared to a year earlier, was fueled by competition between major powers, new military technologies and rumbling warfare from Ukraine to Libya.

Its annual “Military Balance” report said the increase alone in US spending from 2018 to 2019 — $53.4 billion — was almost as big as Britain’s entire defense budget.

“Spending rose as economies recovered from the effects of the financial crisis, but increases have also been driven by sharpening threat perceptions,” IISS chief John Chipman said, launching the report at the Munich Security Conference.

Both the US and China increased spending by 6.6 percent, the report said, to $684.6 billion and $181.1 billion respectively.

Europe — driven by ongoing concerns about Russia — stepped up by 4.2 percent, but this only brought the continent’s defense spending back to 2008 levels, before the global financial crisis saw budgets slashed.

European NATO members have been seeking to increase spending to placate President Donald Trump, who has repeatedly accused them of freeloading on the US.

Trump has railed at European allies, particularly Germany, for not living up to a 2014 NATO pledge to spend two percent of GDP on defence.

The mercurial president’s anger over spending has fuelled concern about his commitment to the transatlantic alliance, culminating in an explosive 2018 summit where he launched a blistering public attack on Germany in a televised meeting with Chancellor Angela Merkel.

“We are witnessing today an increasingly destructive momentum in global politics,” Steinmeier said.

“Every year we are getting further and further away from our goal of creating a more peaceful world through international cooperation.”

Key elements of the international order that developed after the Second World War have come under increasing challenge.

The collapse last year of the Cold War-era Intermediate-Range Nuclear Forces (INF) treaty and the doubts surrounding the renewal of the New START arms reduction treaty, which expires in 2021, have contributed to the mood of instability, the IISS report said.

Speaking in Munich, US House Speaker Nancy Pelosi warned of a “disturbing erosion” of arms control limits that had “kept the world safe for decades”.

“Irresponsible governments are accelerating their pursuit of nuclear power and missile capability. The world can ill afford an arms race,” she said.

China’s programme of military modernization — described by the IISS as “striking for its scale, speed and ambition” — has also unsettled Washington as well as its allies in the Pacific.

In October, Beijing showed off new technologies including its DF-17 hypersonic glide vehicle — designed to deliver warheads at huge speeds so as to avoid interception.

Russia, pursuing its own modernization project, has already announced the entry into service of its own hypersonic missile system.

Dubbed Avangard, the system has been tested at speeds of Mach 27, or roughly 33,000 kilometers (20,500 miles) per hour, according to Moscow.

Hypersonic missiles are worrying Western officials, because they are so fast and so maneuverable that they make existing defense systems useless and give almost no warning of attack.

A senior NATO official warned that in a hypersonic missile strike, it may not even be clear what the target is “until there’s a boom on the ground”.

Elsewhere, spending in Asia has grown more than 50 percent in a decade, rising from $275 billion in 2010 to $423bn in 2019 in real terms as the continent’s economic success has allowed countries to invest more in their militaries.

Pompeo rejects claims that US has quit global role

Tamer Trump on show at G7, but brash US leader never far