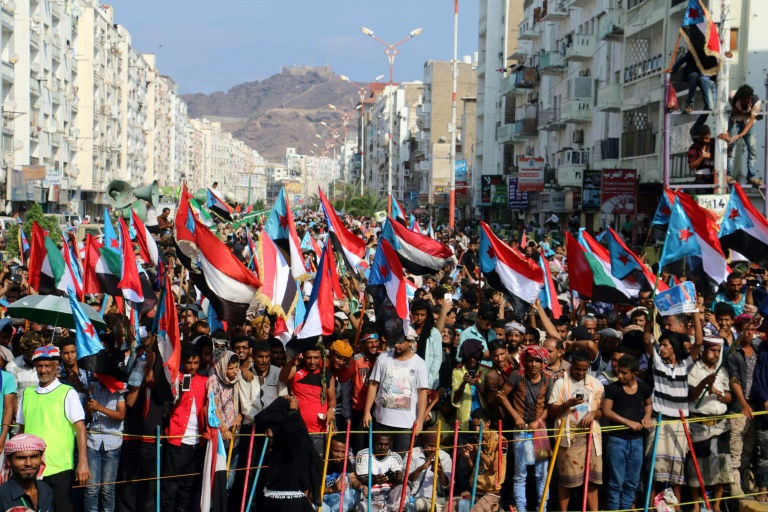 Yemen’s prime minister accused southern separatists of an attempted coup on Sunday after they took over the government headquarters amid fierce clashes in the city of Aden.

Prime Minister Ahmed bin Dagher called on the Saudi-led military coalition, which has been backing the government against Shiite Huthi rebels in control of much of the north, to intervene in its defence.

Security sources and residents said fighting appeared to have spread to most of the southern port city of Aden, throwing Yemen into further chaos after years of civil war.

The southern separatists — who want the return of an independent state that ended with Yemen’s unification in 1990 — had backed President Abedrabbo Mansour Hadi’s government against the Huthis but tensions between the two sides had been on the rise.

“A coup is ongoing here in Aden against legitimacy and the country’s unity,” Dagher said in a statement.

Security sources told AFP that pro-separatist units trained and backed by the United Arab Emirates had taken over the government headquarters in Aden after clashes.

At least six people, including four from pro-government forces, were killed and dozens wounded, the sources said.

The fighting erupted after separatist protestors were prevented from entering the city for a protest to demand the government’s ouster from Aden, established as its interim base after the Iran-backed Huthis seized control of the capital Sanaa in 2014.

The coalition, which launched its intervention against the rebels in March 2015, had urged restraint ahead of the planned protest.

It called on all sides to “adhere to the language of calm dialogue”, according to a statement cited late Saturday by Saudi state news agency SPA.

Universities, schools and the only international airport in the city had all been closed, according to witnesses.

Dagher said that events in Aden were headed towards “total military confrontation” and urged members of the coalition, in particular the UAE, to take action.

He also warned that separating south Yemen from the rest of the country would benefit Iran and the Huthis.

“Iran is trying to consolidate its presence in Yemen through the Huthis and by splitting Yemen, we are giving them one-third of the land and three-quarters of the population,” Dagher said.

Sunday’s rally was called by the South Transition Council, an autonomous body aimed at overseeing self-governance among southern provinces.

The 26-member council, which is not recognised by Hadi’s government, includes the governors of five southern provinces and two cabinet ministers.

Former Aden governor Aidarous al-Zoubeidi formed the council in May after Hadi fired him the previous month.

The council had asked Hadi to make changes in the government and gave him one week to do so — a deadline that expired on Sunday.

It had warned that if Hadi did not accept the demand, its supporters would begin a protest campaign to oust Dagher’s government.

The separatists have long campaigned for the secession of southern Yemen.

South Yemen was an independent state — with former British colony Aden as its capital — from its formation in 1967 until 1990, when it was unified with North Yemen under northern leader Ali Abdullah Saleh.

Four years later, it launched a separatist rebellion that culminated in its occupation by northern forces.

The scars of that war are still widely felt, feeding separatist sentiment.

The Huthis, a northern Shiite minority, seized Sanaa in September 2014 with the help of Saleh and army units loyal to him.

In March 2015, the rebels advanced on Aden, where Hadi took refuge after escaping house arrest in the capital.

But the Saudi-led coalition helped pro-Hadi forces push the rebels out of Aden in July that year, as well as from four other provinces.

Hadi loyalists have been boosted by the Popular Resistance alliance of southern separatists and tribesmen who took up arms after the rebels advanced on their regions.

Years of UN-backed peace efforts have failed to resolve the conflict in Yemen, which has killed more than 9,200 people and devastated a country that was already among the poorest in the region.

The Huthis have increasingly consolidated their grip on Sanaa and the north, especially since Saleh was killed by Huthi gunmen on December 4 after their alliance collapsed.