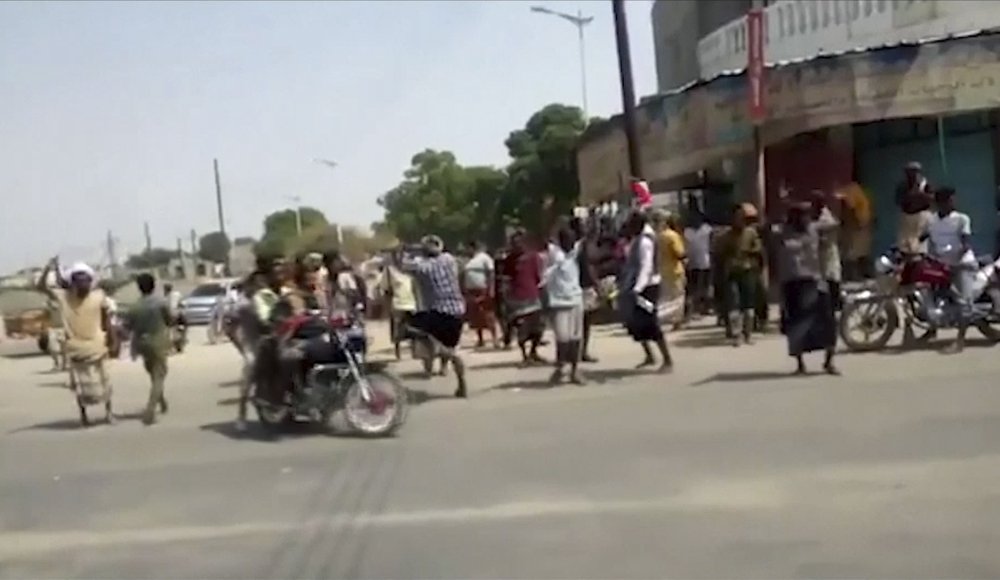 SANAA, Yemen (AP) — Yemen’s president urged Saudi Arabia on Thursday to rein in the United Arab Emirates after warplanes from his former ally staged airstrikes on Yemeni government troops, killing and wounding dozens as they headed to retake the key southern port city of Aden from separatists backed by the UAE.

In a rare statement, President Abed Rabbo Mansour Hadi condemned the UAE, a former ally, for “blatant intervention” in Yemen by providing “support, money and plans” for separatists who aim at “dividing up” the country.

His government called upon the United Nations Security Council to condemn the attacks.

The development raises concerns about the future of a Saudi-led coalition that has been fighting Yemen’s Houthi rebels since 2015 and adds another complex layer to the civil war that has ravaged the Arab world’s most impoverished country.

Infighting has raged for weeks between forces loyal to Yemen’s internationally recognized government and the southern separatists, backed by the UAE — all ostensibly allies in the coalition.

Col. Mohamed al-Oban, a commander of the government’s special forces in Abyan province, said the troops were on the road, headed from Abyan toward Aden on Thursday, when the strikes took place, killing at least 30.

The UAE issued a statement acknowledging its fighter jets carried out the airstrikes, saying that they were targeting “terrorists” and that the strikes came in response to attacks on the coalition.

“The United Arab Emirates stresses its rights to self-defense and response to the threats targeting the forces of the Arab coalition after terrorist organizations increased their attacks against the coalition forces,” read the statement issued by the UAE Foreign Ministry.

At least six raids were carried out by Emirati warplanes around the temporary capital, according to government military sources who asked to remain anonymous.

In a statement approved by all its members, the U.N. Security Council strongly supported a negotiated political solution in Yemen that addresses legitimate concerns of all Yemenis, including those in the south. It called on all involved “to show restraint and to preserve Yemen’s territorial integrity.”

Yemen’s civil war started in 2014 when Shiite Houthi rebels overran the capital, Sanaa, and much of the country’s north. A Saudi-led coalition of mostly Arab states intervened a year later to try and restore President Mansour Abed Rabbo Hadi to power.

The UAE is part of that coalition but it never fully threw its support behind Hadi, allegedly over his ties to Yemen’s Muslim Brotherhood, choosing instead to train and support the separatist militias.

Yemen was split into two countries, the North and South Yemen, during much of the Cold War before unifying in 1990 but a separatist movement has continued in the south. The Brotherhood is a pan-Arab Islamist movement that has been designated as a terrorist group by several Arab governments, including the UAE.

In January 2018, an Apache helicopter belonging to the UAE hit two armored vehicles carrying government forces near the Aden airport during a similar bout of infighting between Hadi’s government and the separatists.

However, this was the first time the government in an “explicit and irrevocable” statement turned against the UAE, heralding further fractures in the Saudi coalition, Al-Muslimi said.

Thursday’s airstrikes also underscore the fragile nature of the Saudi-led coalition and could spell its doom, he added. “This is a natural ending for a coalition that actually never really existed,” said Al-Muslimi. “It was based on instant goals and the belief the war in Yemen would be won quickly.”

Thursday’s airstrikes came a day after Yemeni government forces pushed into Aden to try and retake the city from the UAE-backed separatists.

Earlier on Wednesday, government troops wrested back control of Zinjibar, the capital of neighboring Abyan province, from the separatists and headed toward Aden.

According to officials speaking on condition of anonymity to discuss the matter with reporters, forces loyal to Hadi gained some ground at the Aden airport complex before the separatists forced them to retreat. Hadi’s forces also lost Zinjibar again to separatists on Thursday.

Videos showing separatist militia in control of the airport were posted on social media on Thursday by the Southern Transitional Council, the separatists’ commanding body.

The push by the government forces into Aden also underscored the seesaw nature of the fighting. Only weeks before, the separatists had gained much territory in southern Yemen, pushing government forces out of strategic cities and areas.

In his statement, Yemen’s president described the current situation as a “turning point” and a “difficult moment in our history” adding that government forces are fighting on two fronts: one against the Houthis, as well as UAE-backed separatists.

“It’s unimaginable that our need for our brothers to fight against Iran becomes a beginning to divide up the country,” Hadi also said.

Photo: In this frame grab from video provided by Yemen Today, Yemeni army vehicles enter Zinjibar, Yemen, Wednesday, Aug. 28, 2019. Yemeni officials and local residents say forces loyal to the country’s internationally recognized government have wrested control of the capital of southern Abyan province from separatists backed by the United Arab Emirates. They say government forces on Wednesday pushed the UAE-backed militia, known as the Security Belt, out of Zinjibar after clasher that left at least one dead and 30 wounded fighters. (Yemen Today via AP)

WHO says it has ‘zero tolerance’ for corruption in Yemen