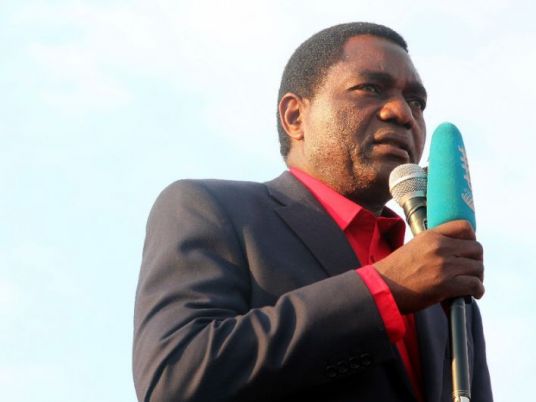 Police were not immediately available to confirm the charges, which came after a dispute over Hichilema's vehicles allegedly obstructing President Edgar Lungu's motorcade on a main road.

More than 100 armed police surrounded Hichilema's house outside Lusaka overnight, and tear gas was fired before a raid when he was taken into custody, AFP reporters witnessed.

"They have detained him on the basis that he committed treasonable charges," Jack Mwiimbu, Hichilema's lawyer, told reporters at the property.

Hichilema — who says he does not recognise Lungu as president — allegedly refused to give way to Lungu's convoy as they were both travelling to Western province for a traditional ceremony at the weekend.

He says that the vote was rigged and accuses Lungu of an unprecedented bout of political repression in Zambia, which has been known for its relative stability.

The election campaign was marked by clashes between supporters of Lungu's Patriotic Front (PF) party and the UPND.

"They broke [into] the house, tear-gassed the family including small children," said Katuka. "This is really barbaric."

Hichilema, known as "HH", was taken to a police station for questioning.

Treason is a non-bailable offence in Zambia, with a minimum jail term of 15 years and a maximum sentence of death.

"HH is still trying to challenge the result through the courts, but Edgar Lungu is president in theory and in practice.

"There is a lot of mistrust between the two sides.

"Under the treason charge, HH could be detained for some time, so this will suit the ruling party who want to silence the dialogue (about) the election result not being recognised."

Last October, Hichilema and party vice-president Geoffrey Mwamba were arrested for unlawful assembly and sedition when they tried to visit supporters in jail.