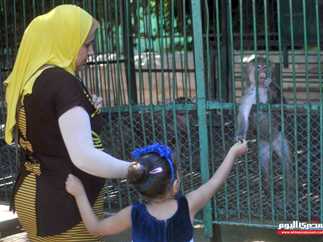 General Manager of Zoos at the Agriculture Ministry Rashad Rahim said that zoos have witnessed a significant increase in visitors during the second and third days of Eid al-Adha.

150,000 people visited zoos nationwide across the three days of Eid, he said.

With 70,000 visitors on Thursday alone, Rahim told Al-Masry Al-Youm that the third day witnessed a significant increase to zoos in general, and al-Asmak (Fish) Park.

Visitors to the Giza Zoo reached 50,000 at the end of the third day of Eid.

The price of tickets is LE5, and window tickets have been increased during Eid to meet the increasing turnout of visitors, he continued.

Rahim added that most visitors on the third day were families.

No sexual harassment cases on first day of Eid: NCW